Once he had been a great magician and hypnotist.
His succes rapidly grew and his shows were always sold out.
But with the years, while his fame and popularity (and vanity) rose,
his concentration and passion and so his skills began to wane.
(There had been a few little signs of decline during his last shows.)
One day, at the request of a kind benefactor he performed at an orphanage and ...
disaster hit.
The second girl he hypnotized, Ella (with her red umbrella,but that's another story),
Ella didn't react to his fillip, she didn't woke up,
fillip, fillip, fillip...nothing happened.
She did everything he asked her, her eyes were open and she smiled, but that was it.
The curtains closed, the curtains opened, the show went on.
After his performance he decided to adopt Ella, because she only reacted to his voice
(and to avoid coming into disrepute, ofcourse).
The girl followed him everywhere and some believed she was just faking,
(the world of entertainment no doubt, was much more exciting than life in the orphanage). 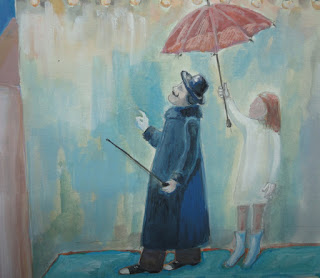 Ella had an older brother who had fled the orphanage at the age of fourteen.
His name was Plillip.
After some wanderings, fate and good fortune brought Phillip in contact with an Arabian prince.
The prince immediately noticed the young man's exceptional love for horses.
That love gave him a special gift in handling them and he was offered a nice and well-paid job.
Soon he built himself a fine reputation as horsewhisperer.

Than the day came he went looking for his little sister.
It took him alot of trouble to find out where she was,
but when he did he jumped on his horse and fast as he could,
he rode to the house of the hypnotist. 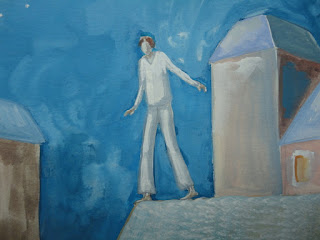 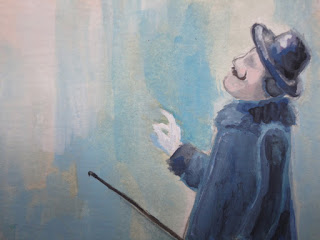 The man denied everything.He had grown quiet fond of Ella.
( don't worry, he never had bad intentions)
Plillip looked him deep in the eyes, he had better not,
in a flash he was hypnotized.
Move! go and never return, the hypnotist said.
Plillip did move,like a sleepwalker he went through the hall,
he climbed the stairs, and another staircase to the attic and (oh no!) onto the roof.
The hypnotist was filliping madly but without result.
Plillip was now walking on the ridge of the roof
and it looked like nothing could stop him.
But Phillip loved horses and the love was mutual.
His horse smelled the danger, it started neighing and stomping,
and where the hypnotist failed , the horse succeeded.
Phillip awoke.
And so did Ella... Plillip, she whispered.
Together they took off without looking behind and lived their lives with ups and downs (but many more ups,they were done with the downs).
The hypnotist withdrew from public life and wrote his memoirs .
He  died some years later, leaving all his belongings to Ella. 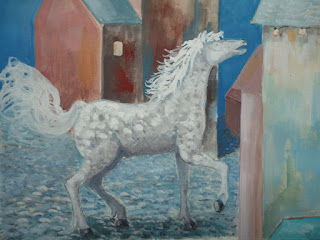 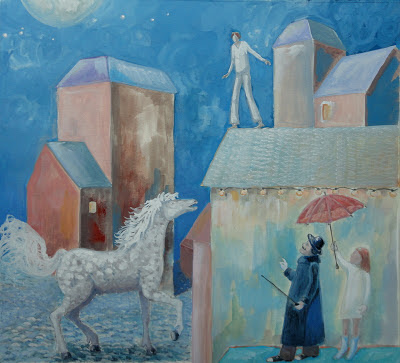 Stefanie provided me with enough 'fillip' to write a  little story ;)
please take a look at this wonderful artist's blog to find out
who took up the challenge this week and enjoy,

have a beautiful weekend
X